Dragon Ball Super Chapter 64 has been released just a while back and it was a very intense chapter. You can read the official English translation of the chapter for free at MangaPlus, their official website, and the app. Things are finally moving forward and it seems like we will finally reach a conclusion to this long Moro arc. Some people are getting upset about how it’s being stretched so much but I think they are gonna love this chapter!

The chapter starts with everyone enquiring about where is Merus as he just suddenly disappeared after putting on such a show. Goku talks to Jaco about Galactic Patrol and how everyone fought Moro, not for themselves but to save the universe. Goku is finally putting some thought and he is ready to face his enemies. He has inherited Merus’ will and it’s time to go ultra. Goku manages to pull off a perfect ultra instinct which makes Jaco and Moro shocked. Moro is instinctively scared as he feels Goku has definitely powered up a lot. Goku tells Moro to stop but Moro keeps fighting. Goku dodges and returns all the hits immobilizing Moro. Beerus and Whis are on the sidelines seeing how Goku will fight with Ultra Instinct. 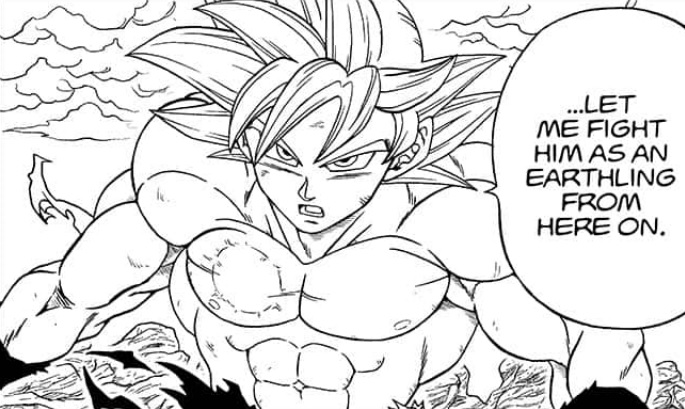 Moro keeps asking Goku about his power but he still can’t understand it even after Goku explains the true essence about Ultra Instinct. Moro then starts powering up as that’s his last resort but it doesn’t work anyway. Goku fights in such an elegant manner that even Beerus praises him which shocked Whis. Then Moro starts to threaten Goku that he will eat up Earth but Goku stops him before he could do any damage. After a few exchanges, Goku immobilized Moro and asks Jaco about his punishment. Jaco says that Goku can finish him right here but Goku then asks that he now wants to fight Moro as an Earthling. Goku tears off his shirt while Beerus is worried that something bad is gonna happen now. It seems like Goku still doesn’t want to finish Moro and that’s why he ‘quit’ Galactic Patrol so that he can fight him as an Earthling. What do you guys think!? Let me know in the comments down below!